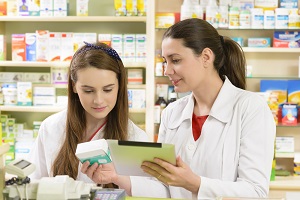 When you go to the doctor for anything other than a routine exam, the likelihood of your leaving with a prescription is pretty high. In fact, the Food and Drug Administration (FDA) estimates that two out of every three doctor’s visits result in the prescription of at least one new medication. As a result, nearly three billion prescriptions—roughly ten times the number of people in the population—are filled each year in the United States. This means that everyone in the U.S. could potentially be taking ten different medications at one time.

Although these prescriptions may be medically necessary when taken individually, a problem arises when your doctor prescribes multiple medications without considering how the drugs may interact with one another. Unfortunately, with the number of drugs on the market and the average number of prescriptions filled, the risk for adverse drug effects are a major public health problem.

Drug interactions, in which one drug negates, alters, or amplifies the effects of another, place thousands of trusting patients at risk every year. Though you may not hear about them in mainstream media, the following drug pairing statistics are newsworthy for those who are prescribed more than one medication at a time.

Despite the obvious risks, little progress has been made to identify, let alone solve, the underlying problems associated with taking multiple drugs. The common yet dangerous belief among doctors and drug manufacturers is that prescriptions have several lines of defense to prevent pairing reactions. Unfortunately, these defensive lines aren’t always strong enough to catch the problem.

On December 15, 2016, the Chicago Tribune posted an article with the headline, “Pharmacies Miss Half of Dangerous Drug Combinations in the Largest and Most Comprehensive Study of its Kind.” Within this article, contact reporters Sam Roe, Ray Long, and Karisa King detail their experiences with testing 255 popular pharmacies. The test? To see how various pharmacies would react when presented with dispensing dangerous drug pairs. Each reporter took two conflicting prescriptions, which have known side effects when taken together, to various commercial and independent pharmacies to be filled. The purpose of the experiment was to determine the following:

Unfortunately, the results of this two-year experiment were far from comforting. Overall, more than half (52%) of the tested pharmacies failed the test by filling the prescriptions without hesitation and without warning the customer of the potential reactions. The failure rates for the four most popular pharmacies are as follows:

Independent pharmacies had an average failure rate of 72%.

These horrifying results expose significant flaws in the pharmacy industry:

The Tribune followed its report with a statement that said: “In response to the study’s findings, CVS, Walgreens, and Walmart each vowed to take significant steps to improve patient safety in their stores nationwide.” Unfortunately, these “significant steps” come far too late for some, and are little comfort to others.

If you or a loved one suffered severe drug interaction effects as a result of pharmacy negligence, you’re entitled to file a personal injury claim. It is important, however, to act quickly as strict time limitations may apply. Contact our office today at 888-526-7616 or visit our Houston office to learn more about your legal rights and how to pursue a strong pharmacy error claim.